Celebrate the 60th Anniversary of one of the greatest big screen adventures ever made, the 1962 Oscar-winning classic, Lawrence of Arabia, presented in the epic grandeur of 70mm! The Loft Cinema is the exclusive venue in Tucson for 70mm film screenings, so don’t miss the chance to experience cinema as it was meant to be seen!

One of the screen’s grandest epics, this monumental story recounts the true-life experiences of T.E. Lawrence, better known to the world as Lawrence of Arabia. A young, idealistic British officer in WWI, Lawrence (Peter O’Toole) is assigned to the camp of Prince Feisal (Alec Guinness), an Arab tribal chieftain and leader in a revolt against the Turks. In a series of brilliant tactical maneuvers, Lawrence leads fifty of Feisal’s men in a tortured three-week crossing of the Nefud Desert to attack the strategic Turkish-held port of Aqaba. And following his successful raids against Turkish troops and trains, Lawrence’s triumphant leadership and unyielding courage gain him nearly god-like status among his Arab brothers. Director David Lean’s career masterpiece, lensed to sweeping perfection by Freddie Young and set to Maurice Jarre’s majestic score, won seven Academy Awards including Best Picture, cemented Peter O’Toole as one of Hollywood’s favorite leading men and features a stellar cast including Claude Rains, Anthony Quinn and Omar Sharif, in his first major English-speaking role. Huge (with a literal cast of thousands), gorgeous (featuring some of the most mesmerizing desert vistas ever captured on film) and dramatically gripping, Lawrence of Arabia is as close to perfect as epic cinema can get, and was made to be seen on the big screen in 70mm! (Dir. by David Lean, 1962, UK, 227 mins. plus one intermission, Rated PG) 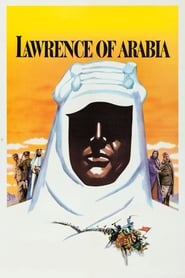