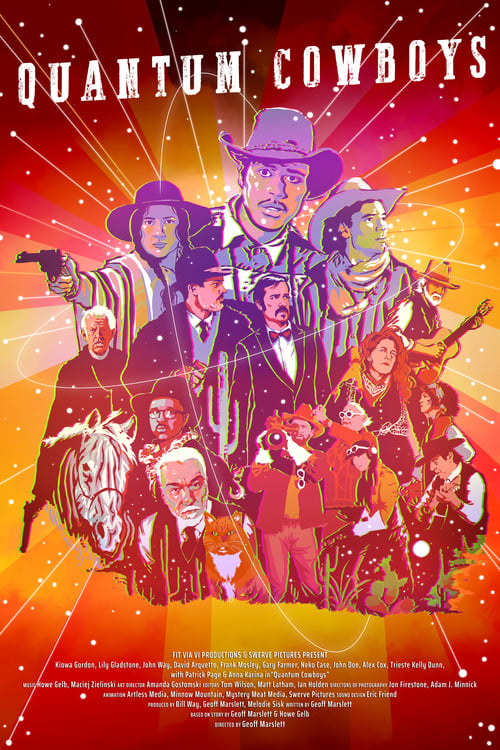 The opening night party, on the patio at The Loft CInema, is the perfect way to get in the festival mood! Starting at 6pm, enjoy a medley of culinary delights catered by the Desert Diamond Casino! And top it off with a free glass of champagne to kick off the fest in style! The menu includes sandwiches, crudites, antipasto and seasonal fruit!

In 1870s Arizona, a pair of drifters (Kiowa Gordon and John Way) are on a quest to find an elusive frontier musician (Howe Gelb) when they team up with an Indigenous woman (Lily Gladstone) intent on reclaiming her land. What sounds like a setup to a classic Western is actually something much more – it’s also the director’s love letter to quantum physics, animation, music and memories. Using a vibrant mix of 16mm live action film, paper cut outs, hand drawn rotoscope animation, oil paintings, 8k video, collages and digital animation, the film takes viewers on a deep dive into a multiverse of time travel and different realities, as our heroes navigate the cosmic terrain known as Arizona. Cerebral, psychedelic, and just plain fun, physics scholar-turned-filmmaker Geoff Marslett’s staggeringly ambitious Quantum Cowboys is overwhelming in the most exhilarating way possible: a deliriously entertaining maelstrom of metaphysical ruminations, gunplay, musical interludes (Neko Case and John Doe stop by to croon tunes), and folksy wisdom (“Planning just insults the future.”). Partially filmed in Arizona (with locations in Tucson, Sedona and Flagstaff), and featuring an eclectic cast including Gary Farmer, Alex Cox, David Arquette and the late French New Wave goddess Anna Karina, Quantum Cowboys is a one-of-a-kind cinematic experience. (Directed by Geoff Marslett, 2022, USA, 99 mins., Not Rated)

Quantum Cowboys director Geoff Marslett (born in Texas) is an animator, director, writer, producer and actor. His work often revolves around the romance of connection and the way exploring your universe changes you and the place you explore. He grew up a cowboy with an interest in physics, and has worked in both construction and science before becoming a filmmaker. He adores feral cats and still genuinely loves making things. He splits his time between teaching at the University of Colorado and making his own films.